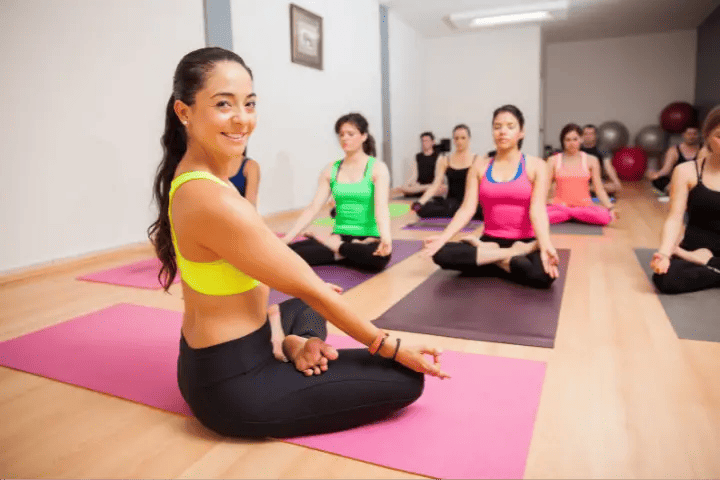 What do you call a person who is doing yoga? There are many confusing terms bandied about, but you will get all the clarity that you need by reading this article.

Whether you’re new to yoga or have been practicing for a while, it’s possible that you’re not acquainted with all of the terminology associated with it.

The name given to the person who instructs you in yoga is one of those things that you may not be aware of. It may be complicated, and you want to be sure that you’re using the correct terminology, so we’re here to assist you in figuring it out.

What Do You Call Someone Doing Yoga?

Yoga instructors are sometimes referred to as yogis. However, this is not a word reserved exclusively for instructors.

Simply described, a yogi is dedicated to the practice of yoga consistently. In other words, if you’ve done a few downward-facing yogas in your life, does that automatically qualify you as a yogi?

No, although widespread, the usual definition of a yogi is too simplistic to accurately characterize what a yogi is and isn’t, and vice versa. Most essential, we must clarify what we mean by the terms “practise,” “commitment,” and “yoga” to avoid misunderstandings.

You might also like to read : Why Do I Yawn During Yoga? Is It Natural To Do So?

Yoga practice refers to the repeated performance of yoga by a yogi to achieve or maintain a certain degree of expertise. Yoga should be practiced at least three times a week for approximately an hour, according to my own experience, and I recommend that you do so. Doing less than that will still be quite helpful, but it will most likely not be enough to achieve the same level of development and improvement.

A long-term dedication to the path of yoga is implied by the word “practise.” Generally speaking, although not always, you are a yogi for the rest of your life.

What Is the Process of Becoming a Yoga Teacher?

Obtaining your certification as a yoga teacher entails much more than just holding a certificate stating that you have finished a teacher training course.

It’s crucial to understand that if your objective is to teach yoga to others, you do not need to complete a yoga teacher training certification program exclusively.

You may enroll in a yoga teacher training program just because you want to or want to learn more about the yoga postures you are currently practicing and the philosophy that underpins yoga practice.

What Makes Someone a Yogi?

The Yogi’s Eight Stages of Development

Depending on your position within the four ashramas system of practice, the frequency, aim, and depth you engage in yoga will differ. The ancient yogis recognized that not everyone could live as hermits or renunciates and practice yoga 24 hours a day, seven days a week. There are advantages to doing yoga at many levels and phases of life. There are four degrees of practitioners in the ashramas system:

The majority of us fall into the grihastha category, which includes living in a home or apartment, having a stable job, having relationships, having a family, and so on.

Incorporating these two methods of yogi categorization, you may develop an intriguing matrix to depict your present level and determine where you’d want to take your practice shortly.

Once you’ve decided where you are on the matrix, it’s simple to discern which two routes you should go to and develop your practice and expand your understanding. While it is essential to acknowledge and appreciate your present level, of course, it is also beneficial to create a long-term goal for yourself to go to the next stage of development.

While on the verge of transitioning from one level or stage to another, you may find yourself establishing a hybrid route that incorporates a little deeper practices with an introspective lifestyle for an intermediate or advanced householder or hermit practice.

We are also lucky to experience the hermit stage and advanced stages in contemporary times by participating in yoga vacations or yoga retreats that do not need a long-term commitment.

While you do not need to appear or behave in any particular manner to be a yogi, there are many essential characteristics that all yogis share. When Arjuna asks Krishna what it takes to become a yogi, Krishna responds,

“Fearlessness, purity of heart, persistence in obtaining knowledge and practising yoga,” which are all necessary qualities.

At its core, a yogi aspires to be the most extraordinary person they can be, amplifying the characteristics of kindness, honesty, compassion, and patience in their interactions with others.

A genuine yogi will practice in an organized, step-by-step manner that is clear and concentrated. A yogi’s goal is to study, purify, and regulate the body, mind, and heart for the soul to be freed from its prison.

A yogi will be on a profound journey to discover one’s authentic self and develop one’s abilities to their maximum potential.

What Is the Path to Becoming a Yogi?

If you find yourself attracted to the practice of yoga and intend to pursue a career as a yogi, the following are the first steps to take.

Develop a traditional yoga and meditation practice that includes at least three sessions each week, and incorporate yoga into your daily routine.

Look for a qualified instructor.

Working with a competent and certified yoga instructor can help you develop consistency and depth in your practice. Developing a professional connection with a yoga teacher will also provide you with a source of inspiration and instruction.

Commit to developing your practice further.

Yoga’s practice and philosophy include a wide range of topics and are pretty profound. Spend time viewing films, reading books, and participating in seminars to learn more about yoga’s deeper practices and get a better understanding of yogic philosophy.

Accept and practice the Yamas and Niyamas.

Make a promise to yourself to adopt as many yogic ideals and ethics as you can into your everyday life. It is not recommended to exercise all of them simultaneously; instead, strive continuously to investigate and practice each one at a time.

Examine your own decisions and make an effort to connect them with a lifestyle of serenity, satisfaction, commitment, and balance.

Why Do People Call Themselves Yogis?

Yogis are well-known, yet many people are unsure of what the word means in its most basic form: yogi. What does it take to be a yogi, and how does one become one?

A yogi is a person who incorporates yoga into their daily routine and dedicates themselves to the practice in order to maintain a high degree of proficiency in it.

Many individuals are exposed to the word ‘yogi,’ which refers to someone who identifies as a yoga devotee or as someone who does yoga. Often, individuals will use this as a hashtag on their yoga practices accounts, or they will brag about their lifestyle. However, being a yogi is more than simply doing yoga; it is also about adopting a healthy lifestyle.

How Do You Address a Yoga Teacher?

A Sanskrit term of Sanskrit origin, Sri or Shree is used as a formal form of salutation, akin to the English words “Mr” or “Mrs.” According to our series on yogis, it is a term of esteem or devotion, which often means “holy one.”

Answers to More Questions on Yoga

Who was the first yoga master, and when did he live?

Lord Siva is regarded as Adiyogi (Adi = the beginning, Adi Yogi = first yogi), as well as the Adi Guru (First Guru), in the yogic tradition. Several thousand years ago, on the banks of Kanti Sarovar Lake nestled in the beautiful Himalayas, Adiyogi imparted his deep wisdom to the legendary Saptarishis, also known as the “seven sages,” who became known as the Saptarishis.

When it comes to yoga, what is the difference between a yoga teacher and a yoga instructor?

An instructor in yoga, as the name suggests, educates, while a yoga teacher teaches. The majority of yoga teachers utilize the time allotted to them during their lessons to practice themselves. They are frequently seen on their yoga mat throughout the class, participating in the asanas with the students and teaching the students on the proper alignment of the postures.

Can you teach yoga without formal qualifications? Is it legal

Yes, it is possible to teach yoga even if you have not completed a yoga teacher certification program. You won’t get into any trouble with the law for doing so. In truth, there are many yoga instructors who do not have a formal training, but have instead learnt through the Guru-Shishya tradition or through books, DVD’s and online videos.

Who Is Eligible to Be a Yoga Teacher?

First and foremost, being a yoga instructor is not reserved for those who have been practicing for years and years and can easily do all of the complicated arm balancing postures. It is more important than their amount of experience and extraordinary talents to guide others through a series of postures, which is why many yoga instructors have a low level of knowledge and remarkable skills.

After everything is said and done, yoga is a fascinating and ever-evolving subject to discuss and learn about, whether you are an active yogi or are thinking about taking it out for the very first time.